Out of Control Athletes – Attitude Is a Choice 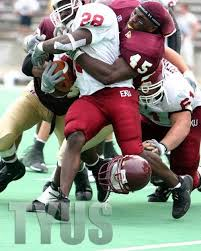 As I sit here and type this blog images of athletes’ names are running through my head. I can recall listening to their stories on ESPN, CNN, ABC, NBC and various other networks. I, like many of you, am tired of hearing about athletes losing their cool against women, children and other innocent citizens. Many of these athletes are punished with fines, suspensions and “timeouts” but have we really addressed the root of the problem?

A negative attitude and the inability to control ones temper is the root of the problem. This hits close to home for me because I too once had a negative attitude and an out of control temper that got me into trouble while playing sports in college. Don’t get me wrong, my attitude and temper were great advantages for me on the field. However, once off the field and back into society, I was perhaps even more dangerous than I was on the field. Our sporting arenas are designed and promoted for controlled chaos, but that isn’t the case in the community. Many athletes including myself were never taught how to transition from an environment that requires controlled chaos to an environment that requires control and compassion. It’s almost like creating a bomb without a “kill switch.” Yes, sports require a certain level of aggression but that doesn’t mean we as athletes don’t have the ability to choose our attitude at any given point in time.

The attitude we choose is a choice. We can’t blame sports for the way an athlete carries himself outside their sporting arena. We can however blame the lack of character development provided to our athletes. Most professional athletes have received countless hours of physical training to prepare themselves to be elite in their given sport. They however have received little to no training to prepare them to be elite men and women of character. Yes, attitude is a choice but you can’t choose the right attitude if you haven’t been trained what the right attitude is and when to choose it.

We place our children in school to become smart and we put them in sports to learn to compete and have fun. Maybe it’s time we give them some character development so that they’re not just smart, fast and strong but men and women of elite character. The problem doesn’t begin at the professional level, but at the little league level.

What do you think?