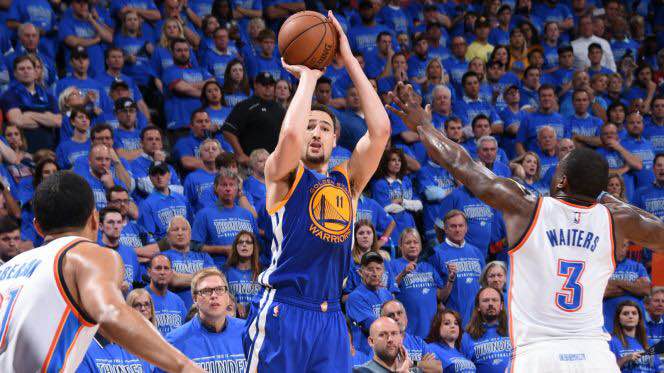 The Golden State Warriors have had one of the most magical seasons in NBA History. The Warriors started the 2015-16 season by winning their first 24 games, which broke the previous best start in NBA history. They also broke the all-time NBA record for wins set bet Michael Jordan and the Chicago Bulls, of which most thought would never be broken.

The Warriors entered the playoffs as the overwhelming favorite to win the NBA Championship. They won their first series against the Houston Rockets in 5 games and their second series against the Trail Blazers in 5 games. However, the Western Conference Finals would prove to be the biggest test of the Warriors NBA Season.
The Oklahoma City Thunder went into Oracle Arena and beat the Golden State Warriors in the first game of the Western Conference Finals. The Warriors rarely lose at home and were beat the first game of the Western Conference Finals. They did however respond in the second game with a win. However, the Warriors traveled to Oklahoma City for two road games that would change the trajectory of the series. The Warriors lost two games in a row for the first time in the 2015-16 season. If the Warriors weren’t shocked, the world absolutely was. Golden State now found themselves in a 3-1 hole that they needed to find a way to climb out of if they had any hopes of winning the 2015-16 NBA Championship that most thought was a forgone conclusion. Very few teams have ever come back from a 3-1 deficit, but the Warriors responded in Game 5 with a home win. Then they had to travel back to Oklahoma City for a pivotal Game 6 win or go home game.

The Warriors were down late in the 4th quarter of Game 6 when I turned the T.V. off almost assured that with the lead and the momentum, the Oklahoma Thunder had just pulled off the biggest upset in NBA History. I awoke the following morning to the news that Klay Thompson and the Warriors pulled off one of the greatest comebacks in NBA History to force a Game 7. Klay Thompson set an NBA record with 11 3-pointers and helped save the Warriors season. His response after he was asked about the record was, “I should have had at least 13 because I missed some wide-open looks early.” The Warriors’ backs were against the ropes and many stopped believing. Golden State on the other hand came out fighting like Warriors and are going home to defend their title.

The Golden State Warriors season couldn’t have been written better and I can’t pass up this opportunity to teach my children and my athletes’ the valuable lesson of competing to the end no matter the odds. There will come a point in all our lives when our backs are against the ropes and we will have to decide to either come out fighting or to throw in the towel. While there are many different ways to teach your children this life principal, I think that the Warriors have given us a very tangible and vivid example that our young athletes’ can easily relate to.

When you sit down with you children tonight or the next time you talk to your athletes, discus with them the journey that the Warriors have taken throughout the season. Remind them that there will be days when they feel like they can’t lose and there will be that day when it feels like the entire world is against them. We must teach our youth how to deal with the ups and downs in life and that it only gets better if we come out giving it our best shot. Klay Thompson and the Warriors didn’t stop shooting. They live by the jump shot and they die by the jump shot. This past Saturday they lived on. On Monday, May 30, 2016 we will find out if they’ll live to shoot again.